5 Techniques for IoT Scalability and Their Challenges

Isn’t it amazing that you can not only use your watch to check the time but also make phone calls, send text messages, and monitor your heart rate? This and many other examples of the Internet of Things (IoT) make the idea of creating IoT so attractive.

But, simply setting up an IoT system isn’t good enough. It has to be able to handle a growing amount of work by adding additional resources, which can be challenging to achieve. Working with software testing agencies is definitely helpful, but the root of scalability issues goes way beyond the testing stage.

Before we get into that and provide you with 5 techniques for IoT scalability, let’s briefly go over what IoT is and some common examples.

Simply put, the Internet of Things or IoT describes different devices that are now connected to the internet, collecting and sharing data. Thanks to cloud computing platforms, machine learning, conversational AI, and low-cost sensor technology, it’s now possible to connect everyday objects to the internet via embedded devices.

Some common examples of IoT other than watches include smart home devices, connected cars, autonomous farming equipment, smart factory equipment, and many others.

Businesses that invest in IoT typically start with a long-term vision of growth, which results in better performance over time. Some, however, miss some crucial steps in the process, and that’s why IoT scalability issues occur.

The first and most common mistake is the lack of planning. Before you start building a solution and waste your money, we advise you to obtain the Proof of Concept (POC).

POC is basically testing certain assumptions to determine if the idea is feasible, viable, and applicable in practice. If the testing shows that the idea doesn’t solve a particular problem, your product is most likely going to fail.

Also, the more complex your project is, the greater the number of aspects that should be considered at the planning stage. Skipping this step will diminish the project’s growth capacity.

Another problem businesses face is budgetary constraints. Some businesses don’t want to invest in the project before they’re absolutely sure it’s going to work out. Unfortunately, this is exactly why some projects don’t work out – there’s not enough money for them to kick off. 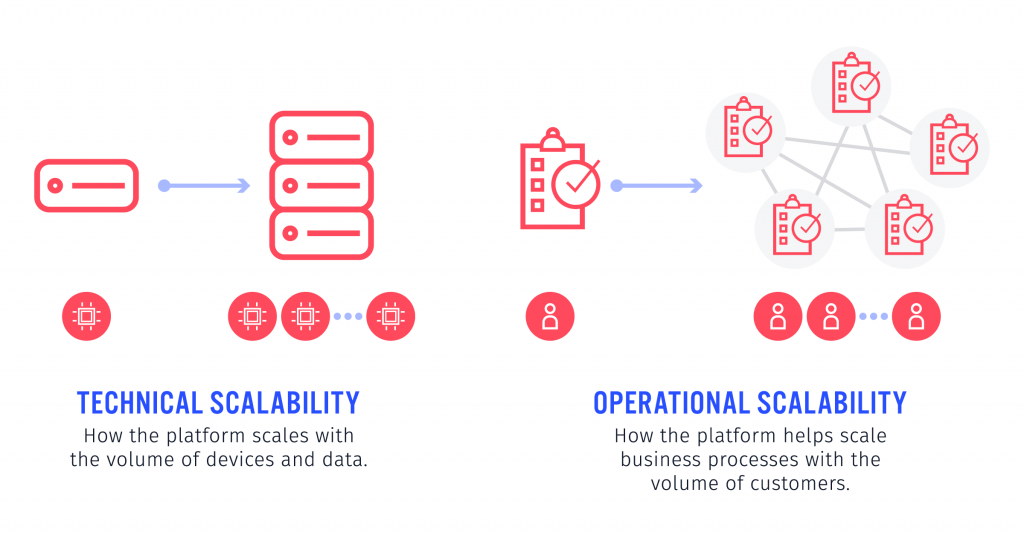 Now that we’ve explained why IoT scalability issues happen, let’s see how you can improve it.

Picking the wrong architecture in the beginning stages of development can be very problematic, as it usually leads to a lot of problems in the future. For that reason, it’s important to ensure your project is viable once the entire product is finished.

For example, using the MQTT protocol for communication between IoT devices may seem like a good idea for smaller projects. This protocol is known for being efficient, all while ensuring reduced network usage. However, it’s actually not that effective due to its complexity, latency and security issues, and difficulty in providing global scalability.

For that reason, we advise you to use a simpler architecture that includes REST APIs. This kind of architecture is easier to scale and use. It’s also more secure.

When you’re using a centralized AEP platform, all data goes to an external centralized database and is temporarily stored to ensure that the client can interact with a device.

Even if the data is encrypted, everything stored in the database is vulnerable to cyber-attacks. Latency issues may also occur when using a traditional approach.

A decentralized AEP platform, on the other hand, establishes a direct connection between the client and the device. This will ensure lower latency between IoT devices while eliminating the risk of interception. Scalability is also easier to achieve because the data isn’t transmitted through a central setup.

While this may not always be the case, sometimes it’s better to operate slowly and not try to immediately reach your full potential.

For instance, rushing to adopt too many IoT devices all at once isn’t the best option. Instead, start with a couple of devices and add more when you’re sure you can handle the data flow they provide. This way, you’ll be able to manage your business easily and better prepare yourself for scalability problems that may appear in the future.

Keep in mind that accommodating a new device is more time-consuming than the alternative, which is why this idea isn’t the best for large projects.

IoT devices that are connected to the same network can interface with each other, which poses a certain security threat. If there are a lot of IoT devices, manually performing tasks such as bootstrapping, device registration, and software configuration simply isn’t feasible.

For that reason, we advise you to automate as many tasks as you can. Automated bootstrapping, for instance, will allow you to save time and increase efficiency.

The security of device interfaces will also be enhanced through bootstrapping the remote security key infrastructure (BRSKI) protocol. This protocol provides secure device onboarding, which is something you want to aim for.

Finally, the key to success and IoT scalability is continuous testing. Each time you add a new feature or attempt IoT at scale, remember to test all aspects that might influence device scalability.

We advise you to keep records of latency levels, the amount of bandwidth being used, the devices connected, the messages that are sent and received, and any other aspects that might influence IoT scalability.

Stress testing will also help you examine the limits of your project and tweak it in a way that satisfies your customers’ needs.

Considering that the biggest challenge with IoT scalability is the lack of planning, the first thing you should do is make a detailed plan as to what your project will look like.

Once that’s done, everything will be a breeze – start with the right architecture, use a decentralized AEP platform, automate what you can, and think about limiting your growth.

In the end, remember to continuously test your project and change it so that your chances of increasing IoT scalability are greater.

Sophie Douglas is a digital marketing specialist and a journalist based in Columbus, state of Ohio.
Her characters are passionate, innovative, and ambitious.

Before becoming a writer for DigitalStrategyOne, she was writing short stories, screenplays, and directing short films.