Our phones these days carry more personal information about us than any other documents or software’s out there. You may have messages or images you want to keep in private. In order to do that it’s crucial to keep them protected. Thanks to the technology, on this very day there are many different ways how we can protect our phones. Well, since you are here, you are probably looking for more protection than the usual screen lock. That being said, we are going to share with you an amazing article in which we are going to help you choose the best app lock for android that suits you best. Please keep in mind that this article isn’t going to point out which is the best app lock. It’s simply a collection of the best app locks and the choice of which app you are going to use is completely up to you.

With over 350 million users, AppLock is one of the most used and of course one of the best app lock for android. This app can lock Facebook, Gallery or any other app you desire. AppLock can hide pictures and videos from your gallery. The hidden items are vanished from your gallery app and are only visible in the photo vault.

With AppLock users don’t have to worry if their phone is in their parents or friends hands. In addition, if you decide to go with this app in the app description you have well explained tutorial on how to use the app. Applock is free to use as long as you don’t mind a few ads. If you are movie person you should check these free movie apps.

Unlike most apps, Privacy Knight is ad-free and entirely free to use. It is brought to you by Alibaba Group. The app features a Secret Door where you can change the icon to disguise Privacy Knight to a secret dialer. It contains a privacy vault here you can hide pictures and videos into vault.

Users have no need to lock gallery, however their stuff is still safe. In addition, it comes with a face unlock which is the fastest and safest biometrics lock. It is one of the most used apps because it’s clean from ads and it’s very user-friendly developed. As we’ve mentioned earlier, Privacy Knight is free to download and completely ad-free.

Most of you are probably familiar with the Norton Anti Virus for PC. Well, those people who are using Norton as their Anti Virus on their PC will choose to go with this App Lock. However, don’t understand us wrong.

It is a great choice and that is why it’s considered as one of the best app lock for android. Norton App Lock comes with many features. Users can lock one or more app with the same 4 digit pin. You can protect your photos and videos from others by adding password.

Users can also lock their social apps to make sure they are the only one who are changing their status. The system requirement is Android 4.1 or higher. Norton App Lock is entirely free to use and the best part is that it’s ad-free.

This app is brought to you by Cheetah Mobile. Cheetah Mobile are makers of Clean Master. Before installing this app, you should know that they support fingerprint unlock only if your device contains the fingerprint sensor.

The CM AppLock can lock various stuff such as Wi-Fi, Bluetooth, Settings or any other app you want to be protected. Where this app shines the most is the part of the Intruder Selfie. It can take a photo of the people who tried to unlock your app right away.

In addition, it email the snooper’s photo to you immediately. The best part is that this app is entirely free to use and ad-free as well. Read: Best Rooting Apps for Android Phones

With a rating of 4.5 and millions of users satisfied, this app lock surly deserves a place on the list of the best app lock for android. However, don’t get us wrong. We didn’t put this app on this list just for its rating.

This is a simple app that features many options. You can lock WhatsApp, Gallery, Messenger, Instagram, Contacts or to put it simply, any app you want. With this app lock you never have to worry that your personal info is going to fall in someone hands.

You can lock your apps with password, patter or even fingerprint. In addition, it comes with themes with many color options. The app is free to use as long as you don’t mind a few ads.

Perfect AppLock is another one of the better security lock apps for android. Like the other apps, this app lock features the basics. In addition, it has included support for locking up WiFi, Bluetooth and other toggles.

It comes with Screen Filter supper where users can effectively manage screen brightness of individual apps. You can also lock home screen, incoming or outgoing calls and lock a certain app to install or uninstall. You have 2 versions available from this app.

The only difference between the free and the paid versions is that in the paid you don’t have ads. Other than that, you have all the same features in the free you have in the paid.

IVY AppLock is another free app lock and privacy guard to prevent snoopers from entering your private data. It is considered as one of the best app lock for android because of many reasons. You can lock social apps such as Facebook, Twitter, Instagram and so on.

Users can also lock system apps like contacts, SMS, gallery and many others. In addition, with this app lock you can lock pay apps such as Android Pay, Samsung Pay and PayPal to prevent making unnecessary purchases. It is another free to use app as long as you don’t mind a few ads. Read also: Best Recycle Bin Apps for Android Phones

FingerSecurity is the first app that allows users of an Android device with fingerprint sensor to protect their apps with their fingerprints. This app lock has many features to make your life easier and more secure and that is why it belongs to the list of the best app lock for android.

You can choose any app you like to protect with your fingerprint. Users can also unlock multiple apps at ones. In addition, to make things easier and safer, the developers included alternative password or pin code to unlock apps when fingerprint isn’t recognized. This app is free to download and it’s entirely ad-free.

SpSoft AppLock is one of the better options you have available. It comes with password, pattern and fingerprint unlocking. Users can set the pattern unlock to show up to 18×18 instead of the standard 3×3.

You also have an option to show a fake error message instead of a lock if you want it to. In addition, it’s one of the fewer apps that supports over 30 languages. It’s one of the free apps, however it comes with ads. Check these: Best Screen Recorder Apps for Android & iPhone Devices

Smart Applock is another app that surly deserves a place on the list of the best app lock for android. With over 10 million downloads it’s one of the better choices you have. Like most apps, this comes with the basics. Users can lock various social or system apps with password.

In addition, this is another app that takes selfies of the intruders. Also it features fake lock, notification lock, fingerprint and it comes with 31 languages. It’s another free to use app as long as you don’t mind a few ads.

Well, we’ve reviewed the top 10 app lockers for android. As we’ve mentioned earlier this article isn’t deciding which the best app lockers for android is. So the choice of which app you are going with is up to you. If you think we’ve missed some app that belongs to this list, please drop a comment below or contact us. 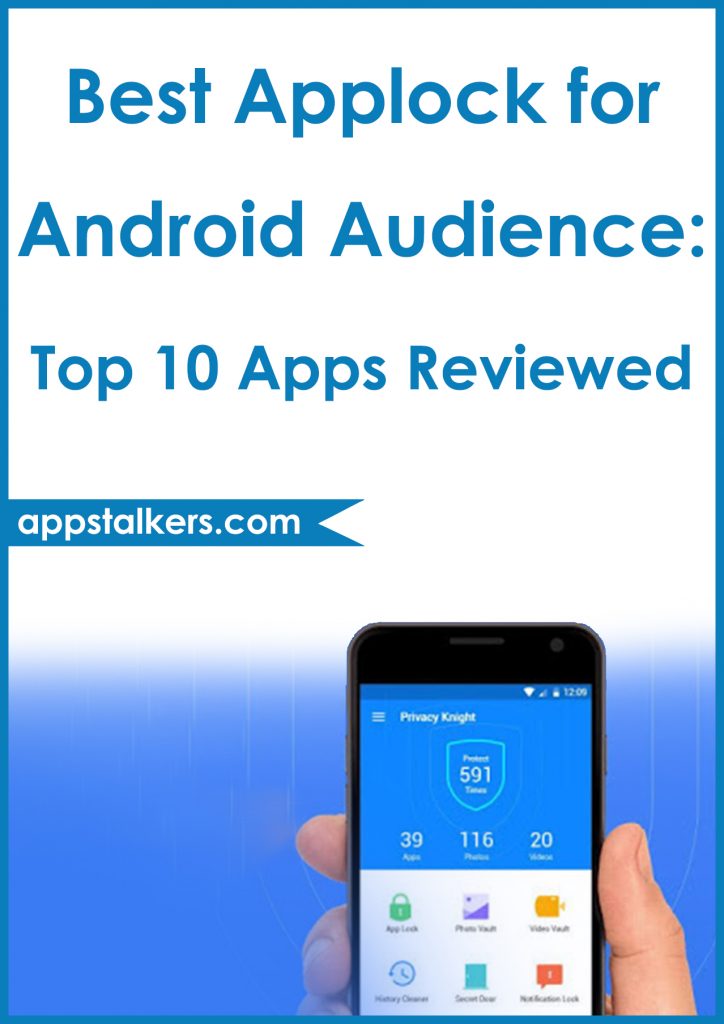